Yes, Martini. Not the glamorous shaken-not-stirred tipple of James Bond, but an Italian vermouth produced by Martini & Rosso. Everyone of a certain age knows three things about Martini:

And, as this classic TV ad shows, you can look fantastically cool while doing it (well that was what cool looked like in the ’80s at least…).

At Monday’s FutureBook Conference on digital publishing organised by the Bookseller, the ‘any time, anywhere’ line came up again and again.

It’s the second event in recent weeks where I’ve been made to think of those old ‘cool’ ads in a publishing context: Kingston Publishing Masterclass speaker Jon Reed also referred to the need for what he called “Martini marketing”. While sharing his top tips for social media, Reed demanded that publishers do much more targeted marketing in a world where people will seek out information they are interested in.

At Futurebook, however, it was an even stronger theme:

Martini was, therefore, on my mind for much of the day…

So if people want to read any time, any place, anywhere, how do publishers deliver this? Another major theme of the day was the future of the concept of publishers themselves. @DRaccah described herself not as a ‘publisher’ but as someone who does “that profession that used to be called a publisher”. Faber’s Stephen Page echoed her views: “We’re a business about reading and writing. We’re not a book publisher anymore.” In Page’s view, all the stuff that goes on between writers and readers is collectively known as ‘publishing’, and it doesn’t matter whether that is being done by a traditional ‘publisher’, or by someone else. Focusing on publishing, not publishers, his view of the future is dependent on who does the most imaginative, valuable and creative things in that publishing space.

This might sound rather threatening to traditional publishers, but overall the mood was upbeat, with many echoing @DRaccah’s opening point that 2012 would be “an extraordinary year”. Her enthusiasm for discovering, reinventing and creating the future of the book, however, was tempered by a pragmatic comment that we need to let go of some of the things from our past in order to make that happen. Again, Faber’s Page picked on up this, warning – in dapper Don Draper mode – that any “bah-humbugging” is no use to the business of reading and writing, and telling anyone who doesn’t like it to go and do something else instead. 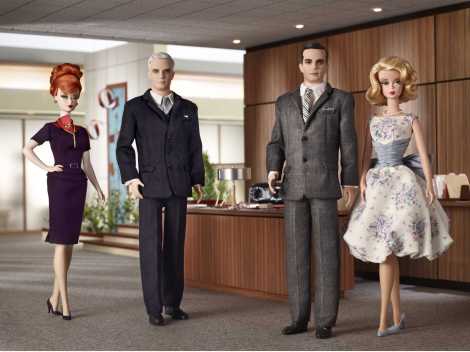 Is this the future of publishing? Faber CEO Stephen Page was channelling Don Draper (second from right) when he said "If you don't like what's being said, change the conversation." © Sipa Press/Rex Features

The day also showcased some thought-provoking projects from a range of organisations – some of them publishers, some of them not. But all are operating in the publishing space outlined by Page. Three particular things that caught my tweeting finger were:

Pearson Education’s Poptropica – a kids’ virtual world that few have heard of, but which 10million children from 130 countries, speaking 100 languages, each spend 1.5 hrs on every month. We didn’t hear much about the details of the user experience, but Jeff Brallier was passionate about the need to make use of readers’ digital or gaming literacy to create engaging and effective digital products. Not doing this, he says, is analagous to putting a camera in front of a radio announcer and calling it TV.

Inkle‘s interactive stories, based on lessons learnt from game design. In a lively presentation, ex-Playstation lead designer and occasional interactive fiction writer @JonIngold talked about the ultimate starting question: “how do you want your player to feel? That’s what we do as creators of content – we make people feel things.” He also made us all feel as if books already were games, since they have the three things all games need: rules, progression and unpredictability. I’ll certainly never look at a bookmark the same way again, after Ingold described it as “your high score”.

Evan Schnittman’s clarion call for publishers to tackle the need to increase revenue and/or reduce costs by rolling out “the enhanced hardcover“. Otherwise known as “books with benefits”, this is a hardback title with an e-book rolled in – and a correspondingly higher recommended retail price. If customers really will pay the few extra pounds, Schnittman claims this is a win for everyone in the value chain: the retailer gets more than from either the traditional hardcover or the ebook, the author gets more (though @caroleagent challenged Schnittman’s assumptions here) and the publisher gets more too. But is it a win for the consumer? Perhaps, if we finally get our any time, anywhere product…

Although Schnittman focused more on the people who make books than the people who buy them, everyone here was talking about the C word: Consumers. Putting consumers at the heart of retail, supporting consumers who want any time-anywhere access, enabling consumers to feel something, rewarding consumers for reading and sharing, building long-term loyalty with consumers… ; just like Martini, consumers reared their ugly heads at me at every moment of the day.

Publishing is no longer about selling to retailers, said @Pottermore‘s Charlie Redmayne, it’s about selling to the consumer. Getting your books ‘discovered’ in the mire of self-published offerings, said Enhanced Editions’ @gunzalis, is about creating demand, meeting demand and supporting loyal customers. And all this, said Redmayne, means two important things:

It’s also not surprising that the man who’s now working with one of the biggest-ever character brands called for publishers to focus on developing big consumer brands, over many years. Of course, major publishers already do this with some authors, as we recently learnt from Publishing Masterclass speaker Nick Robinson, who shared the story of Vintage Books’ development of Jo Nesbo. But perhaps publishers aren’t so great about doing this across multiple platforms? With this in mind, Stephen Page wants publishers to stop saying “we’ve just bought a great book” and start thinking “we’ve just licensed a copyright”, because it’s doing clever, interesting and creative things with copyright – in partnership with people from other creative industries – which will lead to new ways of reaching the consumer directly.

Building relationships with consumers, though, is still a big ask – especially when, as Cambridge University Press’s @PressFuturist pointed out, organisations like Amazon and Apple won’t share consumer data with the people-who-once-called-themselves-publishers. The absence of either of these ‘frenemies’ at Futurebook was like a pesky lumbering elephant in every seminar room. The future may be about delivering the any time, any place, anywhere experience for consumers, but we’re going to have to work hard to carve out part of the new publishing space for us, alongside the two big elephantine As. @NicholasLovell‘s answer is for publishers to define their new identity not as content distributors, but as content creators. He also thinks there’s never been an easier time to make a living (though he’s careful to point out you may not make a fortune) as a content creator. This makes me very happy. Why? Because I already run my own content creation company. So now all I need is a Martini, and I’ll be set for the future. Cheers Futurebook!

7 responses to “The future for publishers is content creation, with a dash of Martini”

Kingston Publishing on other platforms

Error: Twitter did not respond. Please wait a few minutes and refresh this page.

Latest publishing jobs from The Bookseller